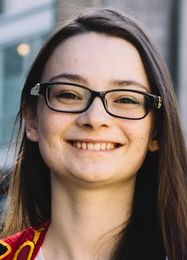 Ms. Jeanie Malone is a PhD candidate in the School of Biomedical Engineering, working in the BC Cancer Research Centre’s Optical Cancer Imaging Lab. A graduate from UBC’s Electrical Engineering program, Jeanie develops and validates optical tools for the early detection and management of cancer. Her work explores the potential of optical coherence tomography (OCT) and autofluorescence imaging (AFI) for ovarian cancer detection. She is involved with a number of other studies including work using OCT to identify early signs of chronic lung allograft dysfunction and OCT-AFI of the endocervical canal to detect pre-cancerous lesions.

Jeanie is a strong advocate for STEM (science, technology, engineering, math) outreach, and is particularly engaged in outreach to groups traditionally underrepresented in STEM fields such as girls and Indigenous youth. Jeanie led Geering Up, the Faculty of Applied Science’s engineering outreach program for kids. She also worked with Actua Canada as an outreach instructor, bringing STEM workshops and camps to communities across Nunavut.

During her undergraduate degree, Jeanie spent three years as an executive in the Engineering Undergraduate Society (EUS), culminating in leading the organization as President in her final year. As a graduate student, Jeanie has chaired the UBC Women in Engineering’s advocacy committee, helped found the APSC Dean’s advisory committee on Equity, Diversity & Inclusion, and spent a term as a member of the Vancouver Senate. She has been a teaching assistant for a breadth of courses in both the undergraduate electrical engineering and new biomedical engineering programs.