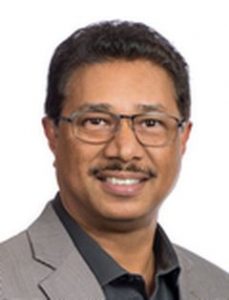 Mr. Raghwa Gopal is President and CEO of Innovate BC.  Raghwa joined Innovate BC from Accelerate Okanagan (AO), where he was Chief Executive Officer.

A noted entrepreneur with over 30 years of international business experience and a recognized technology background, Raghwa has a deep understanding of business strategy, operational efficiency and organizational alignment.

Raghwa has guest lectured at UBC’s Okanagan campus, in the Faculty of Management (Business) and in the School of Arts and Sciences (Computer Science).  He was Entrepreneur-in-Residence at Okanagan College School of Business in 2012-2013, was named Honorary Fellow of the College in 2014 and has served as the director of numerous community-based commissions and foundations including the Central Okanagan Economic Development Commission, the Okanagan College Foundation Board, Women’s Enterprise Centre, Project Literacy, YMCA and the Okanagan Angel Network of technology entrepreneurs.

A graduate of Central Institute of Technology, Wellington, New Zealand in Information Technology, Raghwa has also received degrees in computer science from Collier MacMillan School, Australia and the University of the South Pacific. In addition to his IT expertise, Raghwa is a certified Business and Executive Coach and a lead mentor, well known for his ongoing support and mentorship of young professionals, women in business and First Nations entrepreneurs.